This site is best used when viewport is larger

Dickens Reading of A Christmas Carol 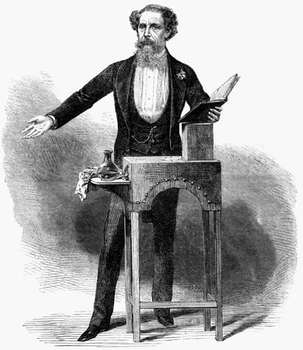 In 1853 Charles Dickens began public readings of his most popular work, A Christmas Carol. When he ended his performances in 1870, he had read it 127 times. From December 1867 to April 1868 he performed over 400 readings on an American tour in Boston, New York, Washington DC and other East Coast cities including Hartford. A Christmas Carol was his most performed reading on this tour.

On December 16th, Mr. Dickens , portrayed by Ken Noll, will come alive again reading A Christmas Carol. It is the same shortened version of the story that Dickens performed. He removed sections for public readings so they would be about 90 minutes including a 10 minute intermission.  Dickens was also a professional actor, so, like his readings, this reading will be animated and captivating and will include over 20 different voices.

Please join us as a group of friends assembled to hear a tale told and to share in the true spirit of Christmas.

Biography:
Kenneth Noll is a Professor Emeritus of Microbiology at the University of Connecticut and has been performing in community theater for over 20 years. In addition to Mr. Dickens he also portrays Charles Darwin in various locations and on-line.

Show tickets and Showtimes
The Windham Theatre Guild is a non-profit organization that has been producing quality community theatre since 1985. Hundreds of community volunteers join us each year as we strive to offer live theatrical and musical productions and education in the performing arts that promote the growth, quality and general welfare of the Arts in Eastern and Central Connecticut.